PFAS — Per- and Polyfluoroalkyl Substances
HOME

PFAS have been and still are widely used, but not all types and uses of PFAS result in the same level of environmental impact and exposure. When considering potential environmental impacts from PFAS, it is critical to be as specific as possible not only about the particular PFAS involved, but also where and how they are released to the environment. For example, a stable, insoluble fluoropolymer such as polytetrafluoroethylene (PTFE) may pose little environmental or health risk once it is in a product. However, potentially significant environmental releases of other PFAS historically or currently used in the manufacturing process (for example, PFAAs, GenX, ADONA) have occurred, but can be limited or eliminated with effective engineering controls. Such considerations may help to focus investigation resources on major sources.

Figure 2-2 illustrates a conceptual PFAS lifecyle beginning at PFAS synthesis (raw materials). These raw materials are then used in a variety of manufacturing processes and industrial/commercial applications to create commercial and consumer products that contain or are treated with PFAS. Throughout this life cycle, variable types and amounts of PFAS may be released to the environment from manufacturing waste streams, fugitive emissions, spills, disposal of PFAS-containing or -treated materials, and general wear and tear of consumer products. Sometimes the intended use of the PFAS product (for example, firefighting foams) requires direct release to the environment. PFAS from a host of sources also may be aggregated in wastewater treatment plant effluent and sludges, creating secondary release sources. The volume, concentration, and mixture of PFAS released to the environment varies based on the source (process, material, or product), release mechanism(s), and environmental controls employed throughout this life cycle. Exposure to PFAS may occur as (1) direct interaction with the manufacturing process, (2) professional or intensive use of PFAS-containing materials, (3) use of or contact with commercial and consumer products containing PFAS, or (4) exposure (human or ecological) to environmental media that have been impacted by PFAS. The relative significance of these exposures will also vary widely. 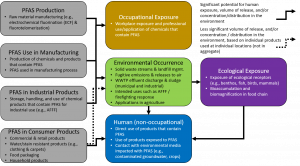 This figure is not exhaustive with regard to all sources or release mechanisms from those sources. Multiple sources may exist at a site, and the relative potential of exposure and environmental impact may vary based on several considerations. Due to the widespread use of PFAS in commercial and consumer products, other minor point source or diffuse releases of PFAS to the environment may occur during use and disposal of some PFAS-containing products. Although these may result in locally significant environmental impacts, these releases typically affect smaller geographic areas and have lower total PFAS mass than major sources, such as PFAS chemical manufacturing, PFAS use in certain industries, and some applications of certain firefighting foams.

Different PFAS products and sources differ in their relative environmental significance, volumes released, distribution mechanisms, area affected, and relative concentration of impacted media. For instance, nonpolymer PFAS used in Class B firefighting foam may impact a moderate area near the source, exhibiting higher groundwater concentrations, in contrast to air emissions of nonpolymer PFAS from fluoropolymer manufacturing, which are more widely dispersed but at lower concentrations.

The type of PFAS involved also determines the relative environmental significance. Nonpolymer PFAS (both per- and polyfluorinated) and some side-chain fluorinated polymer PFAS are likely to pose greater risks when released to the environment than certain fluoropolymer sources, such as the fluoropolymers PTFE, fluorinated ethylene-propylene (FEP), perfluoroalkoxy polymer (PFA), and ethylene tetrafluoroethylene (ETFE). These fluoropolymers are considered to be polymers of low concern (Section 2.2.2.1) because they are relatively stable, insoluble in the environment, and not bioavailable (Henry et al. 2018). However, environmental impact from the production or manufacturing uses of some fluoropolymers can pose a significant risk if emissions are not properly controlled at the industrial site. Also, releases to the environment from the disposal of fluoropolymers cannot be ruled out, as nonpolymer PFAS (such as the PFAAs used as polymerization aids) may be found at trace levels as impurities and byproducts in some fluoropolymer products (3M Company 1999). Many fluoropolymers may be resistant to degradation. For example, in one study, PTFE did not significantly degrade under certain incineration conditions (Aleksandrov et al. 2019). However, research suggests side-chain fluorinated polymers are likely to break down to nonpolymer PFAS over time (Li et al. 2018). For example, commercial fluorotelomer-based polymers (a kind of side-chain fluorinated polymer) have been documented to biodegrade under environmental conditions (Washington et al. 2015) and to abiotically degrade by hydrolysis under environmental and consumer-use conditions (Washington and Jenkins 2015).

Finally, another consideration regarding environmental impacts is the issue of anthropogenic (human-caused, not naturally occurring) ambient or “background” levels of PFAS. As discussed in Section 6, the long duration of PFAS use and their release from many types of sources may have resulted in low-level contamination of environmental media worldwide. The implications of such ambient levels of PFAS should be considered in evaluating exposures and risk levels, establishing site action levels and cleanup goals, and identifying PFAS sources.

Permission is granted to refer to or quote from this publication with the customary acknowledgment of the source (see suggested citation and disclaimer). This web site is owned by ITRC • 1250 H Street, NW • Suite 850 • Washington, DC 20005 • (202) 266-4933 • Email: [email protected] • Terms of Service, Privacy Policy, and Usage Policy ITRC is sponsored by the Environmental Council of the States.